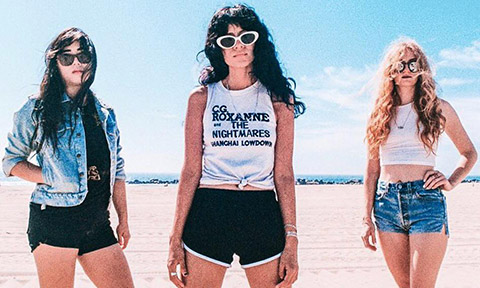 These Band tunes and more are available now:

Drive Your Car
on bandcamp

Oakland, California has been putting out great artists for almost as long as it’s been around. From modern hip-hop Zion I to indie classic Rogue Wave, you could say the city is almost rooted in music. On a murky August Sunday, the East Bay played the perfect setting for a grunge garden party performance for Los Angeles born (and aptly named) L.A. Witch. A band tougher than teeth and sweeter than syrup, ready to take you out in a thirty minute moody-beach-garage set, which they did exclusively for PressureDrop.tv. Taking their royal stage in a backyard nestled in Oakland’s classic summer fog, these ladies dove into a sound somewhere between the Black Hearts and Blondie, with their own California edge.

A three piece headed by Sade Sanchez on guitar, Irita Pai on Bass and Ellie English on drums, the most striking thing about these Witches is not their LA-glam-grunge appearance, but the tightness of their sound. With the rising bass line of opening song Kill My Baby Tonight, the vibe becomes otherworldly, a surreal sound against the flowery, blooming stage. “I’m gonna kill my baby tonight,” Sanchez (also on lead vocals) croons, the words so sugary, the crowd is practically leaning in to hear just how she’ll do it. It’s this very combination, of a band so in-sync and calculated, that brings in the Witchy-ness. They’re spooky, they’re hypnotic, and their music is so layered it’s captivating. The slow burn of the first song, leading into the slick guitar riffs of Brian, made for an interesting change. This song, heavier on drums, has English shine. A rosey, strawberry-blonde, English is a stark contrast to her dark bandmates, but she’s just as potent. Her large sound and pace carried the weight of thrashing songs like Drive Your Car, winding in and out of the spotlight depending on tempo. Pai is the backbone of the group, creating the base for ever song, serene or spooky. She shines on moody Brian, and even more so on blaring You Love Nothing. But it’s Sanchez who’s the force to be reckoned with. Clad in 60’s white sunglasses, she looks almost gentle behind the microphone, but she’s anything but. Sanchez is lethal on guitar, pulling out twanging, almost cinematic solos on Feel Alright and bluesy Baby in Blue Jeans. Her twanging throaty vocals are particularly impressive, especially considering that the band was sick during the show. They start off sweet and end up something powerful and perhaps a little scary.

The band has no special formation story, they were three friends, all from L.A. and all playing music. They are all talented individually, but as is the mark of garage, they’re better (and tighter) together. They thrived in the cloudy setting; three dark figures playing in a garden of earthly delights. The synchronization of the dark ankle socks, the entrancing music and the foggy, almost ethereal backyard stage made for an intoxicatingly sensory experience. And their music spans the genres. Turn up the tempo and they sound almost Western, dial back the drums and they’ve got some Jazz elements. Their final song, Get Lost, off their 2015 self titled EP, brings it all full circle. Sanchez begs “save me from myself” over and over, Pai soars on the bass, and English drums an almost ritualistic beat. They are Witches - in the performing sense of the word at least - soft and sweet on the outside, and dark as hell in their music. When asked if there was anything else they’d like to say, Sanchez gave a half laugh and said, “We like to sacrifice things . . . just kidding.” Who knows if she was? A true witch never tells.