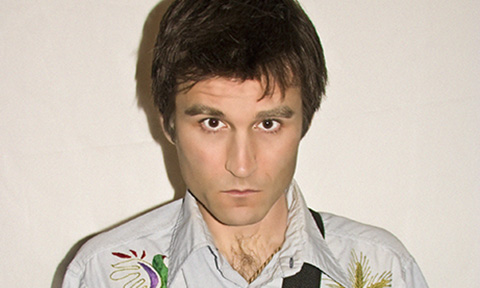 In the midst of a tour to promote their new EP, Neil Michael Hagerty and The Howling Hex performed in gorgeous Dixon, CA for PressureDrop.tv last Thursday. PDtv puts on unique live streams in unexpected locations as evidenced by this performance which took place at the incredible Ruhstaller Farm & Yard. The group, hailing from Drag City Records, has been working together for over a decade releasing “Neil Michael Hagerty and The Howling Hex” (2003) and several other works including “Butterfly” just out this May. Hagerty, the first artist ever to be featured on Drag City in the early '90s, got his start as a member of the underground alt rock Royal Trux before eventually moving onto solo acts as Neil Hagerty (author), Neil Michael Hagerty (artist), and The Howling Hex alongside singer Lexi Mountain and drummer Eric Van Leuven. Though they played only a short set, Hagerty and Hex packed a sharp punch.

The band, known for their social commentaries alongside sporadic, carnival-esque rock shined on opening track, “A Game of Dice.” Singer Lexi Mountain, whose musical background takes from Spoken Word and the inspiration of David Lee Roth, began the song with an anecdote about games themselves, before leading into a full on-artistic anthem backed by Van Leuven’s percussion prowess. Van Leuven’s setup, which included latin rack toms, kick drum, and a xylophone, made a unique backdrop for Mountain and Hagerty’s vocals and guitar. Each track showed a wide range of musical styles from the soft, do-opy “Guided Missiles” to the edgy and blaring “Prime Time Clown.” The beautiful Ruhstaller farm was the perfect setting and contrast to the intensity of the whimsical group, who despite being only a 3-piece, left enough vibrant energy to captivate any audience lucky enough to see them. With the final chords of the bouncing, psychedelic “Butterfly”, Hex and Hagerty packed up their tiny compact car and drove off, en route to other adventures down the road.

Neil Michael Hagerty and The Howling Hex will be performing upcoming shows throughout the West Coast and Canada this summer.