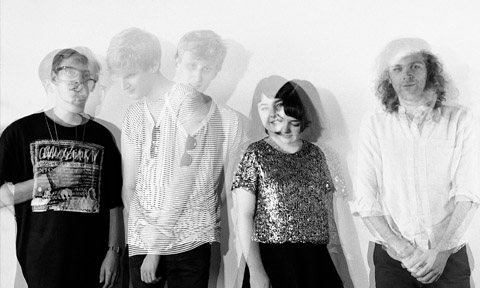 Soundtrack for a Siesta

What comes to mind when you think of New Zealand? Is it The Lord of the Rings saga, with its mystical adventures? Is it rolling green hills and boundless nature? It’s probably not effortless, dreamy synthro-pop, but that’s exactly what sets Yumi Zouma apart. Initially a 2013 collaboration between friends, Yumi Zouma debuted the aptly titled “EP” in 2014, to unprecedented popularity, quickly climbing the charts at sites like Hypemachine and taking the music blogosphere world by storm.It wasn’t long before the collectively stylish four-piece was running in the same circles as major names like Chet Faker and on her New Zealand Tour, Lorde. The band released the sophomore, highly anticipated “EP II” just this year. With Christie Simpson on vocals, Charlie Ryder on guitar, and Josh Burgess and Sam Perry alternating bass/guitar/synthesizer the band had us sold from soundcheck. We at PDtv love them for their classic beachy vibes and thoroughly entrancing sound; Yumi Zouma achieves the medium between dream and reality that so many strive for, and they do it right.

On an uncharacteristically hot July Day, Yumi Zouma performed for PDtv in a classic San Francisco setting, right on the Bay. Situated on a former boat ramp in the heart of the trendy-meets-industrial SOMA, the location lent the perfect contrast to the group’s ethereal, sweet sound. Dressed appropriately in varying shades of blue, the members themselves seemed to meld with the water behind them, almost as if they were meant to perform seaside. And perform they did. From the first flirty notes of, “Dodi” they were almost impossible not to fall in love with, offering some soft, swooney vibes against their industrial surroundings. Though much of their set was characterized by light and perky beats riddled with synthesizer flourishes, many songs had little surprises. The dramatic, soul filled “Song for Zoe and Gwen” was accented by a heavier drum beat to tie it all together, as well as Josh’s impromptu rockin’ dance moves to match the bobbing boats behind him. The group showed off their musical finesse with instrument swaps on the light and beachy “Long Walk Home for Parted Lovers”, changing around guitars and bass to play different up aspects of the song. Christy’s airy, raspy voice lent a sense of leisure to the set, as if they could have stayed playing in the sun for hours. Her vocals shined on tracks like “The Brae” and the girl-power, “Catastrophe.” The band’s energy was almost as intoxicating as their sense of humor: they jokingly played riffs of “stairway to heaven” after scanning for requests.

WIth a very complex, layered sound, Yumi Zouma echoes everyone from Fleetwood Mac to Beach House, but there’s something different about them. Something soft, empowering, and even a little untamed. With the ending notes of the thumping “Salka Gets Her Hopes Up” to soak up the sun, the group closed the afternoon with a rich, clean finish. With only two years under their belts, Yumi Zouma have a maturity and confidence in their music that decades of experience couldn’t give them. Catch them wherever you can, you won’t regret it.

Yumi Zouma will be performing in Asia before returning to the US in September. Check them out here http://www.yumizouma.com/

These Yumi Zouma tunes and more are available now:

Song for Zoe & Gwen, on iTunes

The Brae, on iTunes
blog comments powered by DISQUS back to top